The 5th of November: 400 Years of Bonfire Tradition

Have you ever heard of Guy Fawkes Night, Bonfire Night, or perhaps the foiled Gunpowder Plot of November 5th, 1605? Perhaps you’ve seen the movie V for Vendetta, which builds its backstory on this memorable event in British history.

Either way, the 5th of November is a big day in England, to say the least. It’s a day that commemorates the failed attempt – by one particularly unhappy group Englishmen – to blow up the House of Lords in the Palace of Westminster (aka Parliament), with a few dozen barrels of gunpowder no less.

The man who was left to guard the gunpowder barrels that fateful night was called Guy Fawkes, a name by which the current holiday is often referred to.

Guy Fawkes was discovered before he and his fellow conspirators could succeed in their devious plan, and this evasion of disaster led to a celebration across London which manifested itself in the lighting of bonfires (thank you, Wikipedia. https://en.wikipedia.org/wiki/Guy_Fawkes_Night).

The 5th of November has been commemorated in essentially the same way all over England ever since, and these days with the additional flare and excitement of fireworks!

Although the 5th landed on a Sunday this year, most official city-wide celebrations took place earlier during the weekend, starting with the bonfire and fireworks Katie and I ended up seeing on Friday the 3rd.

The 3rd of November

Katie had to go to class that day, and I had not yet had the opportunity to try out the skatepark at Woodhouse Moor, which is a large public park just a short walk from our flat, and an even shorter walk from Katie’s campus. It also happened to be one of the many parks that would be hosting a bonfire and fireworks show that night, and I was excited to go by and see how they were setting up.

As I swerved down the paved footpath late that morning, I came across a grassy clearing where metal fencing was already being set up in preparation for the crowds that would be arriving later that evening.

That’s when I realized that this was not going to be some tiny community wiener roast.

There were piles and piles of wooden pallets that were being off-loaded from a flatbed truck by a John Deere tractor, before then being carried across the lawn where an already sizable foundation was being laid by park workers.

By the time I returned the same way a few hours later, a considerable tower of jagged wood had begun to appear… and was still growing.

Later that evening, at around 6:45, Katie and I stepped out of our flat and headed toward the park on what was the perfect, chilly fall night.

It was like heading to a nighttime football game; no one around us was really talking about where they were going, but everyone was walking the same direction, and as we drew closer to our destination, the leafy sidewalks became more and more crowded.

The bonfire was set to light at 7:00, and it was a couple minutes after by the time we were crossing the street to the dark, densely wooded park entrance.

The fireworks weren’t set to start until 7:30, so we didn’t really think we’d be missing much by arriving a few minutes after the lighting of the bonfire.

Then all of the sudden, through the trees, we heard the slow, distant sound of someone shouting a countdown through a megaphone, and then the rising voices of the crowd counting with him as they reached, “4! 3! 2! 1!”, and then came the sharp, rapid explosion of a round of firecrackers!

What the heck?! Fireworks already?! Did we get the times wrong?!

We sped up, and as we continued I heard someone in the dark next to us say to their buddy that the firecrackers were actually part of the bonfire lighting itself!

Apparently, when the workers build the tower of pallets, they make sure to stick some firecrackers inside, and then, when it comes time to start the blaze, they set the firecrackers off – much more exciting than a simple lighter or matches!

It wasn’t long after hearing the firecrackers that we emerged from the forested area of the park and found ourselves next to the large area of grass I’d been by earlier that day, only the energy there had now become much more vibrant.

The only light in the whole area came from two sets of spotlights that were pointed at the looming tower, and people were coming out from everywhere and trekking across what was by now very well-trampled, wet grass, to the makeshift metal fencing that kept the spectators a good 50 yards from the structure, out of which a great deal of smoke and embers had already begun to spout.

Soon it was as if a volcano had erupted at that very spot. I’d never seen a fire that size before, and the only thing more impressive than the mass and ferocity with which it burned, was the nearly unbearable heat that reached us even while standing behind the other onlookers in front of us.

As the blaze reached its climax, the MC got back on the microphone and went about searching for volunteers to light the fireworks.

Then, I realized they were actually looking for a couple of children to do it… bummer…

But it was a pretty cute event all the same.

They settled on two little twin sisters who looked to be maybe five or six, and they shouted their names very sweetly… albeit mostly incomprehensibly… into the microphone, before the MC did what I found to be very shocking, and escorted the girls inside the ring of metal fencing, without their parents and where it was currently 9000 degrees (Celsius), and led them to the far side of the bonfire, away from the crowd, to where the fuses were to the fireworks.

That was a pretty tough parenting call I’m sure… props to all of those parents out there who don’t let the fear of the their children being blown up prevent them from letting their kids having a great Guy Fawkes Night.

Anyways, after a few minutes we were performing another countdown, this time for the real fireworks…

“Never send a child to do a man’s work” I bitterly thought to myself. “Should have let me do it…”

So then they did the second countdown for the fireworks, and a moment later the night sky above the bonfire exploded in glitter. 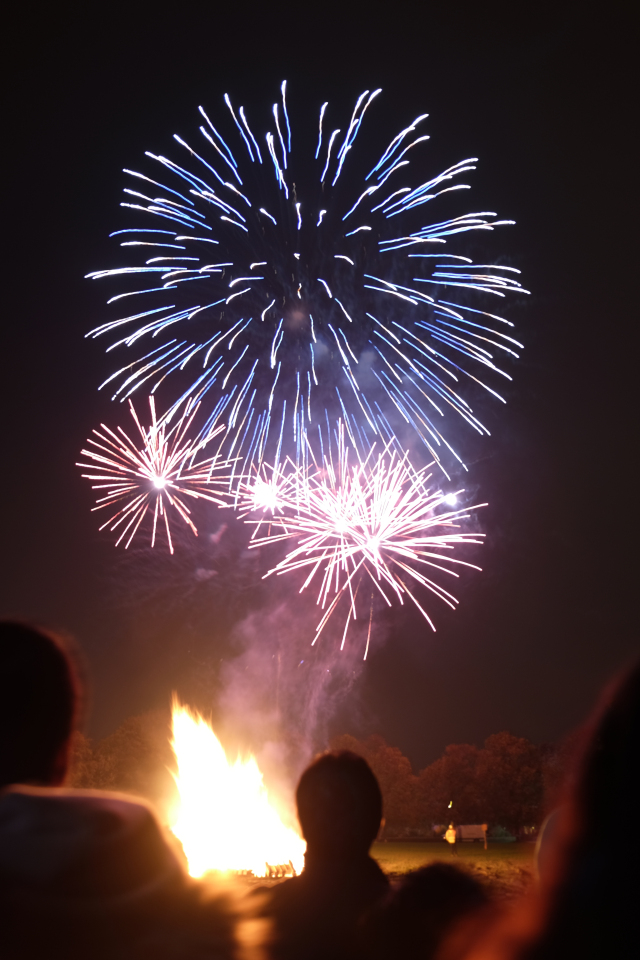 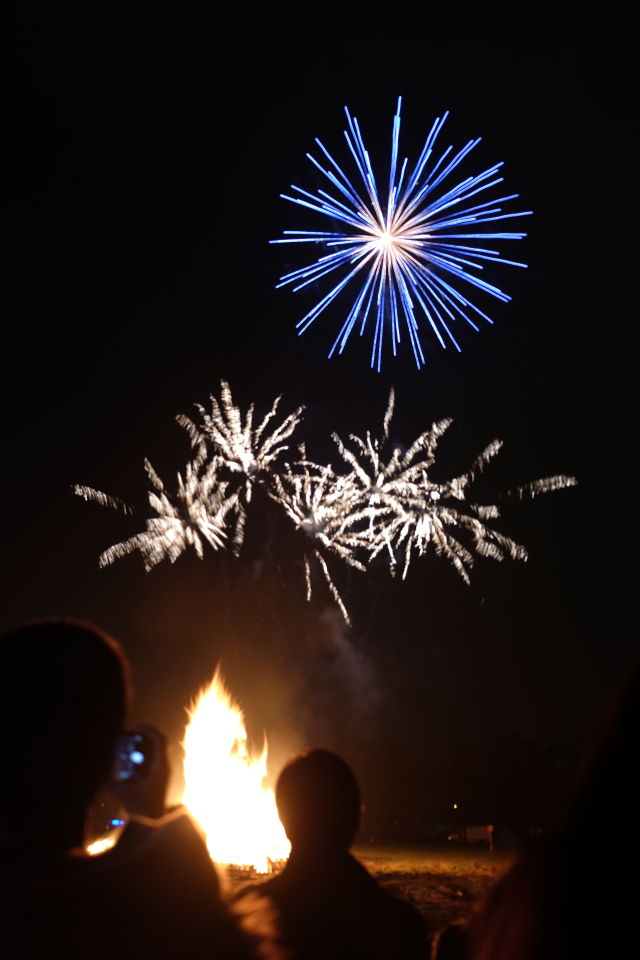 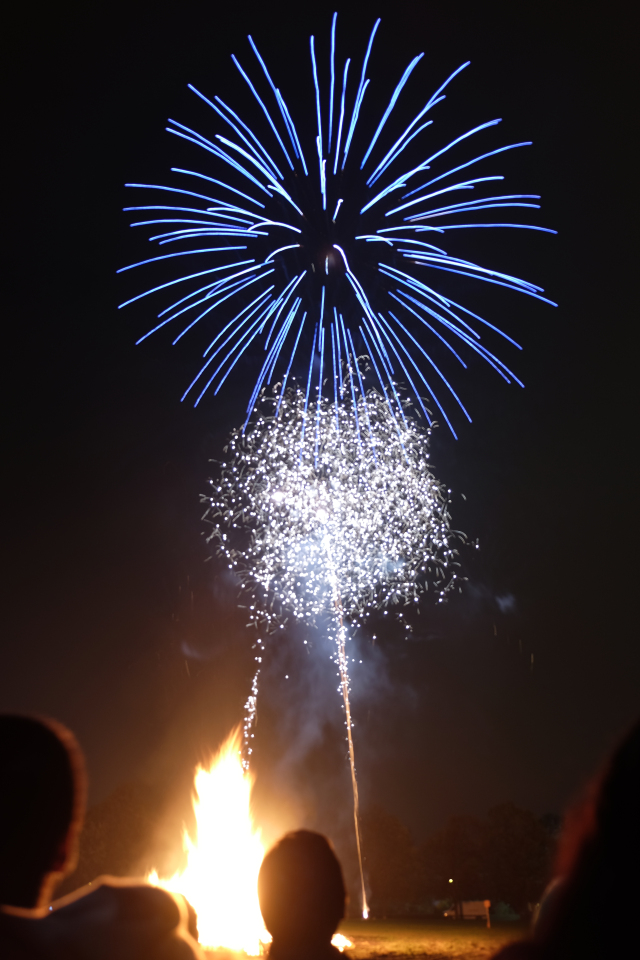 Make no mistake: the English in West Yorkshire know how to put on a fireworks display.

After the show, as the bonfire started to lose strength, Katie and I stared at it for a little while longer, took a quick walk around to enjoy the night air just a bit more, and then went see what they had to offer at the Fish and Chips food truck (no tacos…).

It was still very dark in the area despite the flames, and it was nice to see kids and young couples painting and dancing with their sparklers, just like back home on the 4th of July.

After a few more minutes we started making our way back home, not expecting to see much more of anything that evening.

To our surprise, when we walked into our flat and looked through our windows, and over the chimneys of the houses lining the square outside, and across to the the other side of the valley of the River Aire, we discovered that the entire hillside was alight with soft, regular bursts of multi-colored fireworks both near and far.

“Wow, look at that”, we said to each other, and the pops and cracks of it all echoed all over the city.

They echoed that Friday night…

…and even continued echoing a bit on Monday night!

We didn’t mind though, and all things considered, it made for a pretty spectacular first experience with the infamous 5th of November.

Scotland & Northern England: From the Highlands to the Lowlands… and Lower

Ireland: Around the Emerald Isle in 7 Days