Scotland & Northern England: From the Highlands to the Lowlands… and Lower

With Northern Ireland and England crossed off the list of United Kingdom countries we had visited, it was time to venture three hours north, to legendary Scotland, to collect yet another. This three-day weekend car trip would take us as far north as Inverness, where we would be bearing witness to perhaps the most intriguing of all Scottish summer traditions: The Highland Games.

Edinburgh, Stirling, and the Highlands

Our first stop on the circuit was Edinburgh (pronounced “ed-in-bur-uh”), 4 hours from Leeds. Our one and only stop here was Edinburgh castle, at the top of the Royal Mile, a stretch of attractive medieval road with the castle at its climax; a massive fortress mounted upon an impregnable, rocky hillside. Here we saw statues paying tribute to William Wallace and Robert the Bruce, saw Queen Margaret’s chapel, the oldest building in Edinburgh, and the cannon that they traditionally fire every day at 1:00pm from the castle ramparts, paying homage to when the ships in the bay used to set their clocks by the sound of that cannon. Unfortunately, we arrived after 1:00, haha. 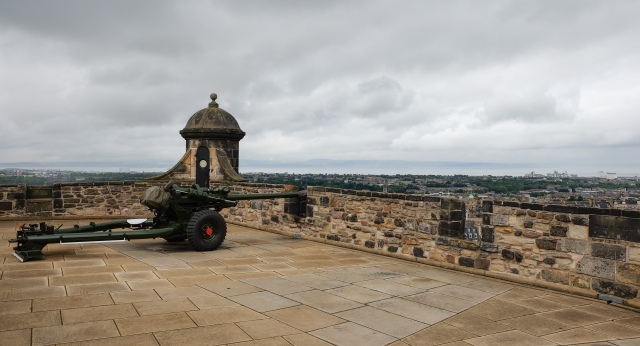 Most exciting for us, Edinburgh castle is home to the Stone of Scone, commonly known as the Stone of Destiny, which was present in the crownings of numerous Scottish royals and, controversially, English royals throughout the centuries. The Stone of Scone used to be housed underneath the Coronation Chair in Westminster Abby (which we had the opportunity to see last year during a visit to London), and was once stolen in 1950 by Scottish nationalists in an act of defiance of British rule. The stone was then returned to England, who then eventually returned it to Scotland, as long as they promised to “loan” it to England for use in future coronations.

The stone is stored behind glass with the Scottish coronation sword and scepter, and no photos are allowed (sorry!). But here’s a google image for your convenience!

The views from Edinburgh castle are astounding to say the least. We only wish we had done our homework before coming here. If we had, we would have known that Sean Connery actually grew up in the suburbs of Edinburgh… and we could have went looking for his home! Unacceptable, we know, but a good reason to come back. 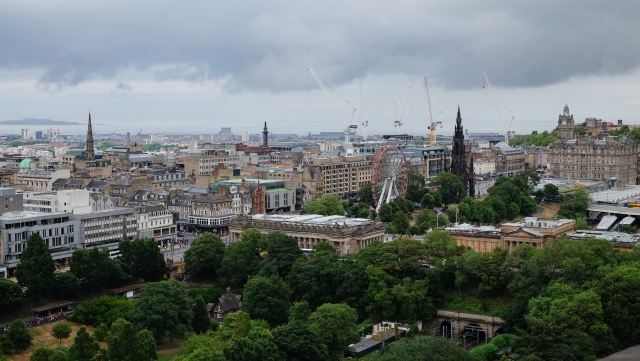 From Edinburgh, we drove up to historic Stirling, a small town in the vast Scottish lowlands, between Edinburgh and Glasgow, and the site of William Wallace’s celebrated surprise attack and defeat of the English in 1297. William Wallace is commemorated here, as well as in many other places in Scotland, by a memorial, manifested in a magnificent tower, jutting out in sharp defiance from the horizon of trees, and with a statue of Wallace himself with sword thrust high in the air, hanging off the side (see second picture, bottom right on tower). A spectacular sight.

From Stirling, we ventured straight north through the wonderful Scottish wilderness and Cairngorms National Park, where we found ourselves in deep valleys, surrounded by tall hillside, at times covered in thick fur trees, and at others, nothing but bare grass. 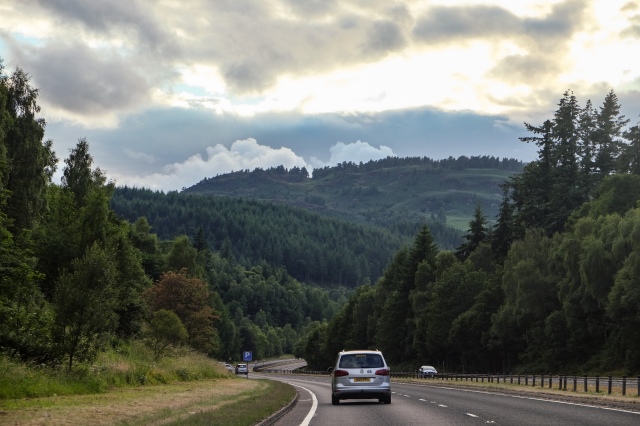 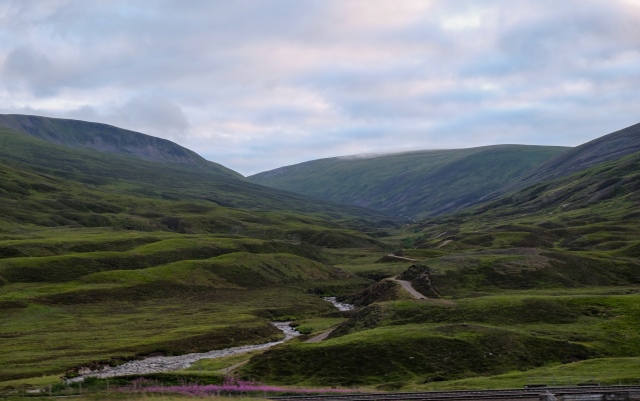 Once we were within a few miles of Inverness, we turned southwest onto a narrow, single lane country rode that took us a few miles through hilly terrain, populated by cows, deer, and rabbits, until we arrived at our BnB for the night, set high on the eastern hillside of the world-famous Loch Ness.

The next day, we set out in the morning, driving up along the shore of beautiful Loch Ness, with it’s steep green hill on the other side, until we came into Inverness, and parked bright and early at the Bught Park fairgrounds, where we would be watching the Inverness Highland Games.

What are the Highland Games? If you simply imagine American Track and Field, but with competitors wearing kilts in Scotland, you’ve pretty much got the general idea, but the Highland Games offer so much more. They are first and foremost a celebration of Scottish culture, and are held in cities all over Scotland, with fanfare ranging from the smaller and more intimate Highland Games, like in Inverness, and the larger Braemar Gathering, which even the Queen of England attends.

There are bag pipe competitions, both for solo and group piping. There is the Highland dance competition, with competitors starting very young. And while there are several running (track) events throughout the day, the highlight of Highland Games is the “Heavies” events, which include but are not limited to the Scots Hammer Throw, Weight for Height, and perhaps the most well known, and undoubtedly most entertaining event: the caber toss, where competitors make running tosses of what look like tall telephone poles, in an attempt to get them to flip end over end, and land with one end of the pole as close to twelve o’clock as possible. Awesome. At the awards ceremony, the Inverness chieftain declares the winner, and closes out the games, just as she was responsible for opening them. 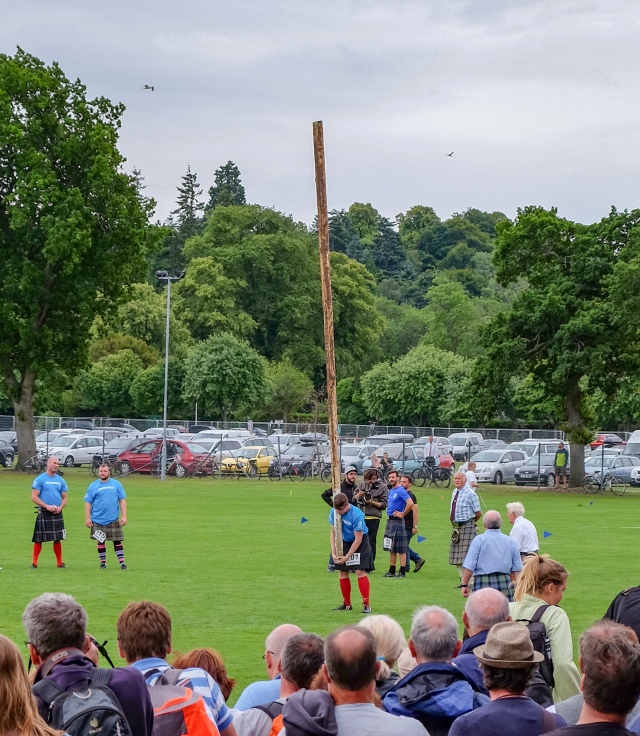 After the awards ceremony (don’t ask us why), the whole day was capped off with the Stonemasons Stone, which is round stone weighing 252 pounds, that has to be lifted and thrown over a horizontal bar without touching; a feat that only 3 competitors were able to accomplish, which was an Inverness Highland Games record.

Not wanting to embarrass the other competitors with our own superhuman strength during the heavy events,  we instead took a moment to enjoy some super haggis (ground sheep’s heart, liver, and lungs), in burger form. 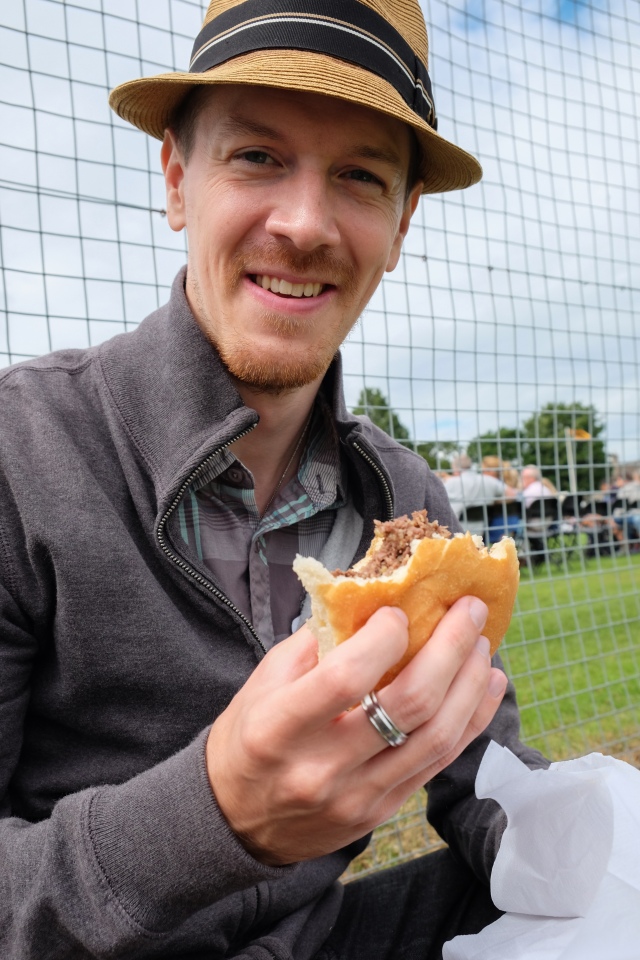 And of course, the pipe bands that march around the field throughout the day were about enough to almost bring someone to tears… not saying who… just someone.

After the Games had concluded, we decided that we did not wish to attend the freaky Polish DJ afterparty (unexplainable) that was set to go until 10 PM, and instead spent that time exploring Inverness itself for a while, especially the river area in the center of town, in the shadow of Inverness Castle, before crossing the bridge over the bay for some nice city views before heading back to the BnB for the night. 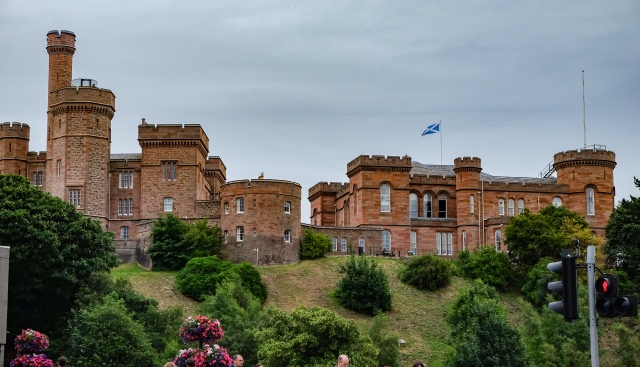 On our third and final day in Scotland, we checked out of our BnB and drove south down the entire length of Loch Ness towards Fort William, loving every minute in this lush environment, and every glimpse we could catch of the water. 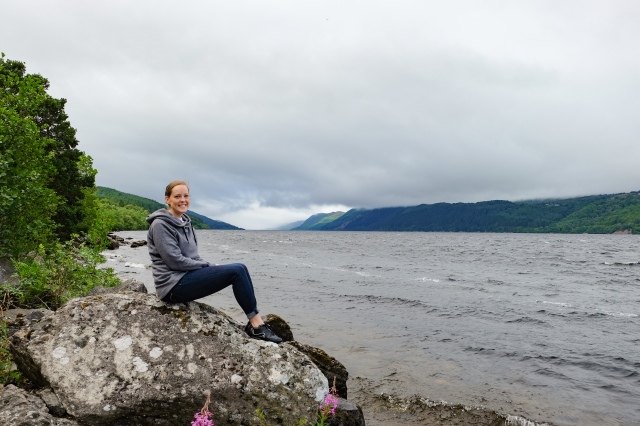 Once we hit Fort William, we hooked a right and headed west, until we arrived at probably the most mystical movie-based landmark we’ve ever seen: the bridge that the Hogwarts Express traveled over in the Harry Potter films. As far as huge fans were concerned, we were not alone! This is apparently a very popular pilgrimage site, and it was worth the stop. 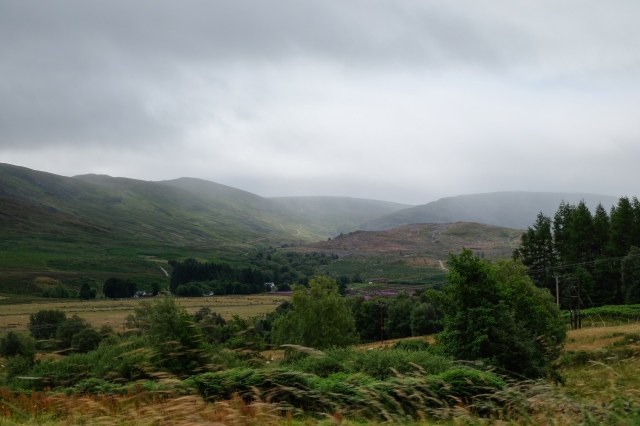 After the bridge, we went back through Fort William, and voyaged through the astounding Glencoe valley, and along picturesque Loch Lommond, until coming into Glasgow (Glas-goh). 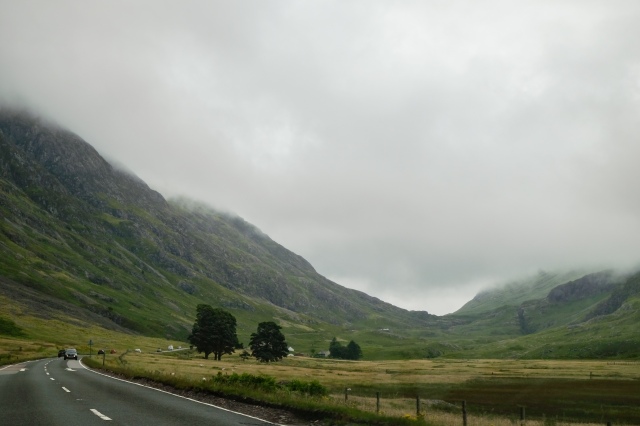 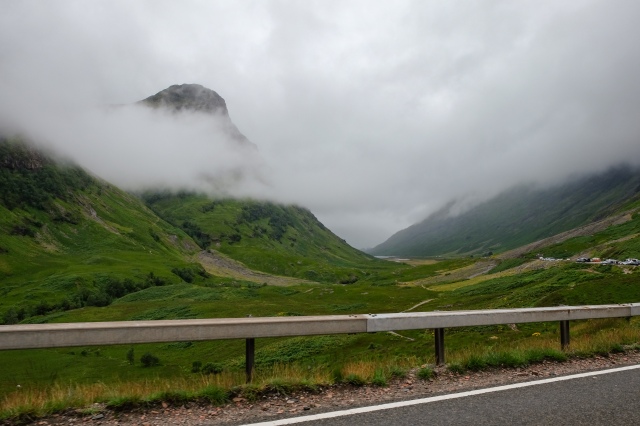 Just driving through Glasgow’s city center, and looking at the river, it was interesting to think that at one time, 25% of the world’s ocean-going vessels were produced in this city’s shipyards, and it still maintains much of its classically industrial feel.

Next stop on the list, and the crowning jewel of the day, was a stop in Keswick (pronounced “kess-ick”), one of the most popular small villages in England’s enchanting Lake District. 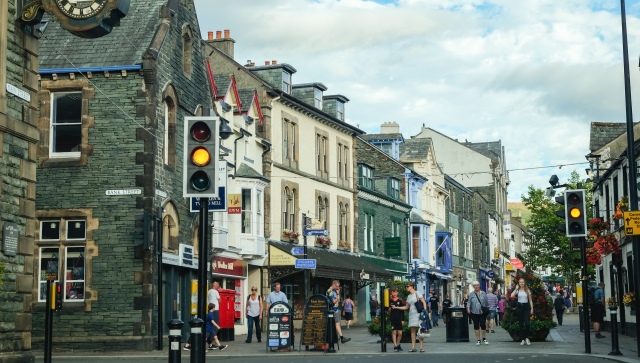 Made up of several lakes, the Lake District offers some of the best scenery England has to offer. We took the advice of our dear friend Rick Steves, and followed the loop set out in his guide book that takes you on a one hour drive (much longer for us) from Keswick, around Derwentwater (the lake used in the X-Wing swoop-in scene in Star Wars, the Force Awakens, FYI) to lake Buttermere, and back to Keswick again. The hills and waters were truly amazing, turning from vivacious shades of green to overwhelming shades of gold as a result of the setting sun. 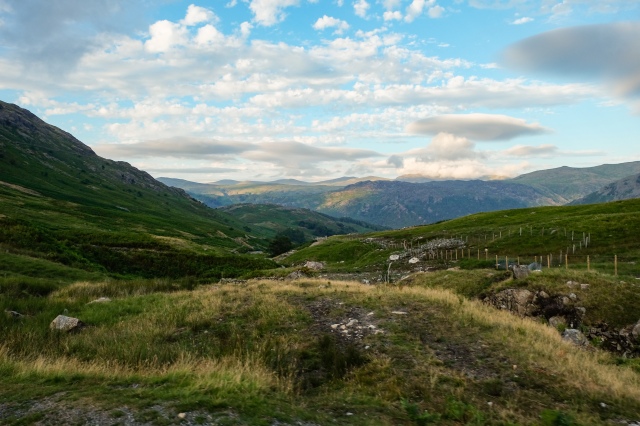 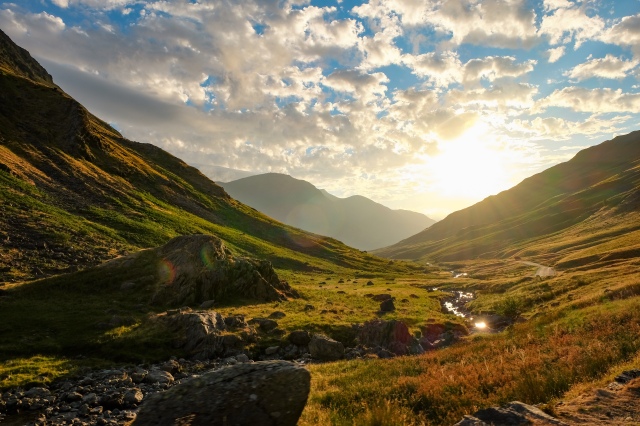 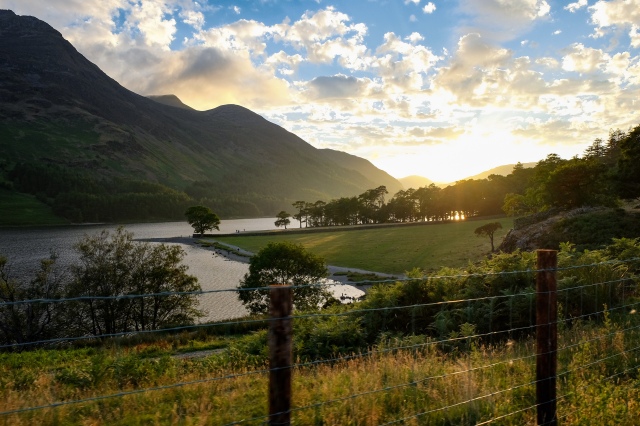 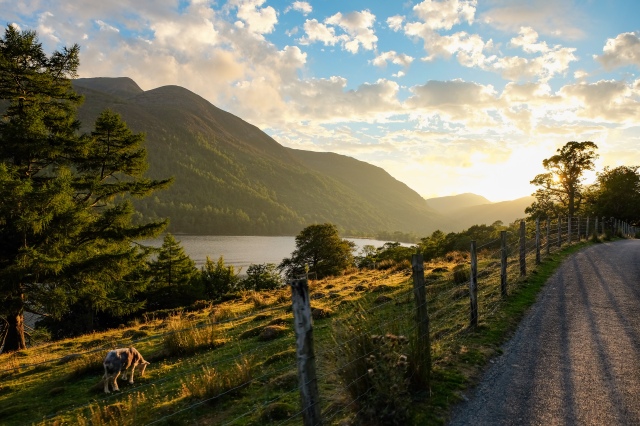 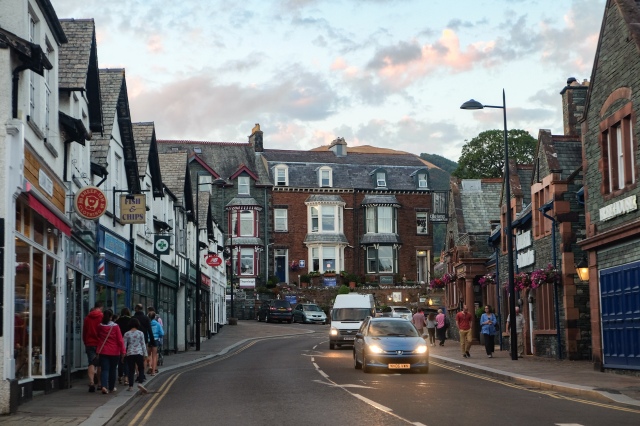 With the sun now below the hills, we headed south to Ullswater lake, where we stood on the quiet shore in the dark and watched the moon’s reflection on the water. 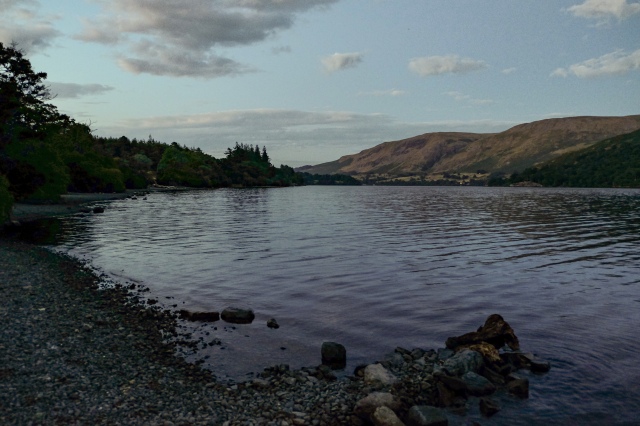 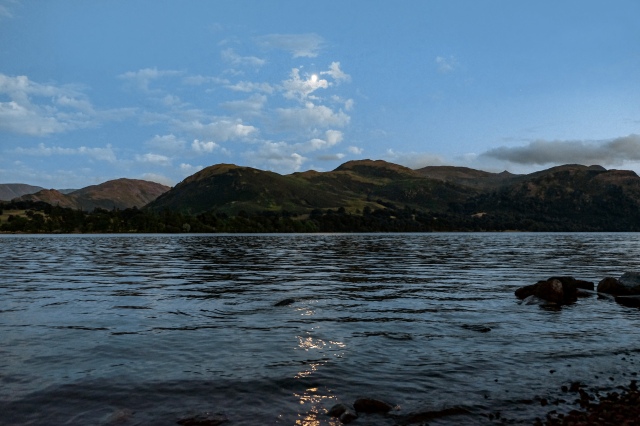 Then we headed up into the foggy, tall hills, where we could only see a few feet of the road in front of our car for what seemed like an eternity. Several hours later, we were pulling through our gate, parking the car, and looking forward to sleeping. 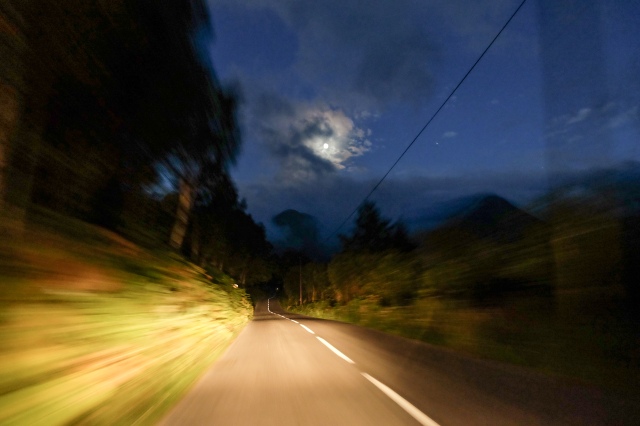 Between experiencing longstanding Scottish traditions and some of the best landscapes that Scotland and England have to offer, this trip was easily #1 in terms of exceeding expectations.

Ireland: Around the Emerald Isle in 7 Days